Unlike most post on this blog this article hasn't come from other blogger. Malena Persson is from 'Scotland Roars' an organisation that campaigns against canned hunting. I'm fully aware that a lot of people might not understand what this involves so she has kindly written this piece for us about an event in Edinburgh on Saturday (tomorrow). It is important that we raise awareness so we can stop this horrible act. 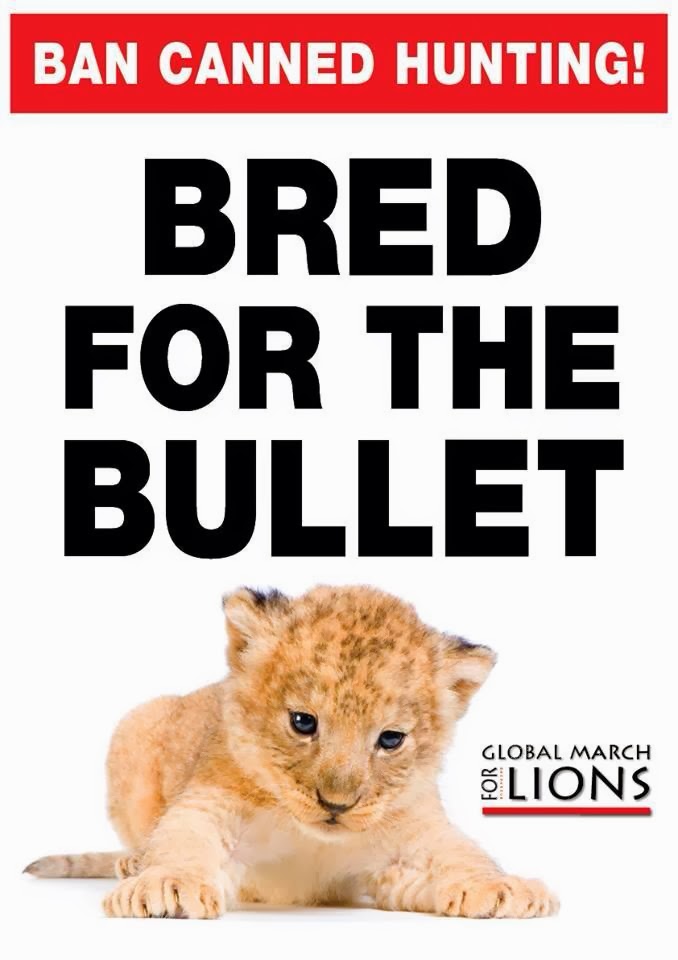 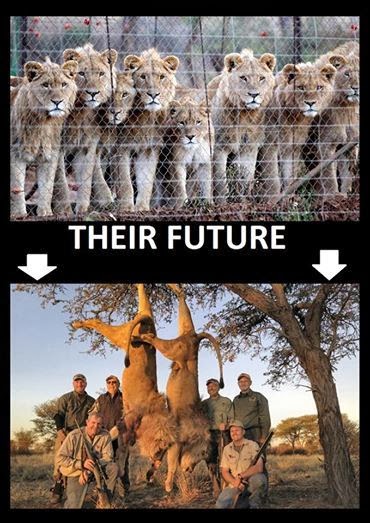 South African wildlife activists have initiated a Global March for Lions that will be held in designated cities throughout the world to highlight the plight of lions embroiled in the canned hunting industry. The march is to be held on Saturday 15th March 2014. Edinburgh is thrilled to be one of the cities to host the event. The organisers are determined that the event will be a great success and the accent will be on creating public awareness for current failures in wildlife legislation that have allowed the once mighty lion to be degraded and traded as common livestock on farms of misery and horror. At most, there are 32,000 – and perhaps as few as 15,000 according to Dr. Pieter Kat of Lion Aid – lions remaining on the entire African continent, as compared to 100,000 lions in the 1960s. 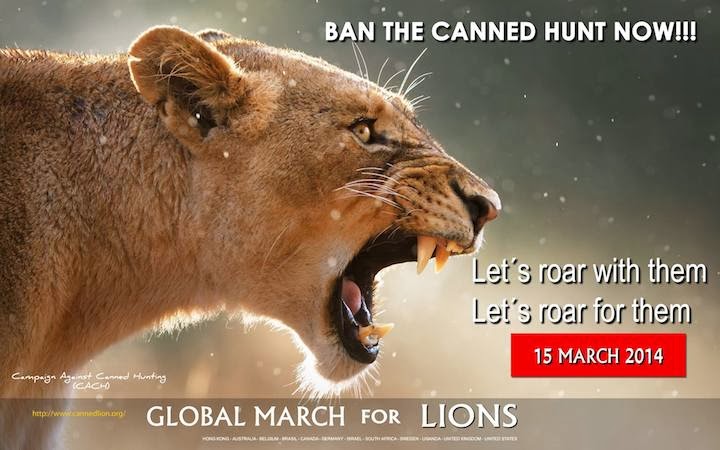 “From the heat of the African summertime to the winter cold of the northern hemisphere we want people to rise up and give out a ROAR for South Africa’s lions and populations elsewhere. Many of our supporters are from overseas and so far we have marches being organised in London, Birmingham, Edinburgh, Brussels, San Francisco, New York, Los Angeles, Austin, Tampa FL, Vancouver BC, Adelaide, Perth, Melbourne, Sydney, Tel Aviv, Jerusalem and Mombasa, with new cities coming on board daily”, says Christine Jordaan, the lady who initiated it all. 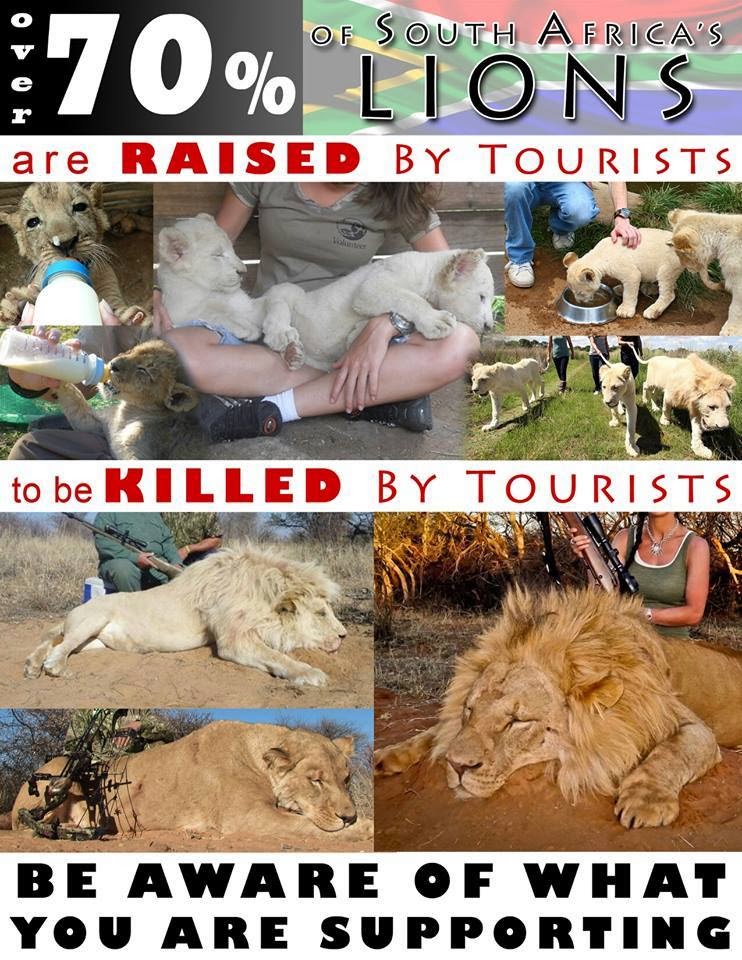 Malena Persson, an Edinburgh based photographer and student at Napier University, came in contact with Paul Tully from London, one of the main organisers, via Social Media in 2013 and as a result the project ‘Scotland Roars’ was created. With an aim to raise awareness around the horrific industry of canned hunting and to save the African lion population from further decrease in numbers, Malena Persson decided to host the the march in Edinburgh.

The March is in support of CACH (the Campaign against Canned Hunting), a Western Cape based charity led by Chris Mercer and Bev Pervan. Chris is a recognisable face in South Adrica, who has appeared on many local and international TV programmes, in interviews and documentaries. After a legal career as an Advocate in Zimbabwe and Botswana, Chris came back to South Africa in 1984, and decided to retire from the law. He claims that he was dragged in to animal welfare work by Bev who had the dream of founding a wildlife sanctuary. Once they were working hands-on with rehab wildlife, he became sensitised to the suffering of animals. In 1997, when the Cook Report exposed the shocking cruelty of the canned hunting of lions, he made up his mind to spend the rest of his life campaigning for the abolition of canned hunting. 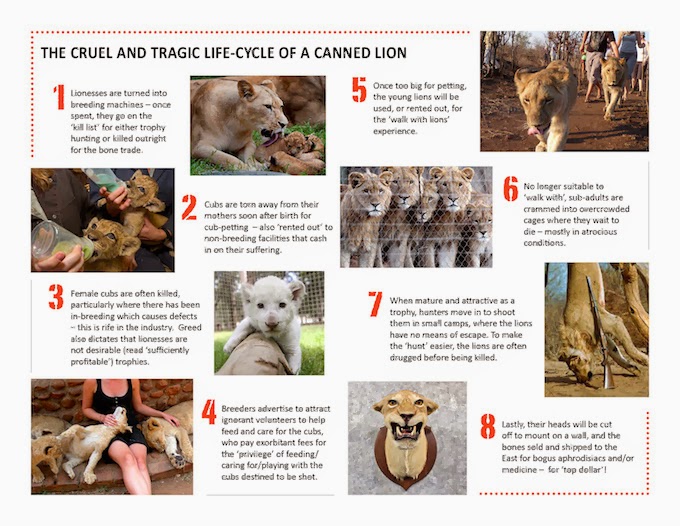 Local NPO’s supporting the march includes Scotland For Elephants and Fundraising for Wildlife FFW. These local organisations together with Scotland Roars want to see the friendly citizens of Edinburgh wholly embrace this cause and turn up in their droves on the 15th March. Over 200 people have already signed up to march for the lions!

Please come along to the event if you are in Edinburgh on Saturday morning to show your support and click 'join' on the Facebook event too. If you have any questions about the event or anything else to do with canned hunting please tweet Malena

The group will meet at 1.45pm outside Trunks Close on Royal Mile and all the other information can be found on the Facebook event site. Thank you for the support Scot Bloggers.

A network for Scottish bloggers to share ideas and see each other's work.
Always a working progress but we are filling this blog with guest posts and interviews with other Scottish bloggers.
Send us an email if you would like to see your post here: scottishbloggers@hotmail.com